We had a fantastic time at Aintree last week, with Crystal Glory and Nells Son both finishing fourth in their first Grade 1 races. This week they have schooled over fences, along with Soft Risk, and they all jumped really well. They will likely do a little bit more schooling if the ground is safe enough, before being turned out for their well deserved summer holidays. Release The Kraken ran a fantastic race on Tuesday at Ayr, just being beaten on the nod. Tfou also put in another good performance when finishing third in the maiden hurdle. He’s a big horse who has needed time and after a summer in the field, he should come a stronger horse and will now have some experience behind him. He may have one more run this season, depending on how the ground is. Release The Kraken just being pipped at the post

It’s Carlisle’s last jumps meeting of the season tomorrow (Saturday) and we’ve got three runners. Rickety Gate in the 1:09 Amateur Riders Handicap Hurdle, ridden by Miss Amy Corrado, who finished a credible third under Better Getalong at the beginning of April. Better Getalong and Amy at Ayr

Holme Abbey has the blinkers on again for the 1:44 Handicap Chase and he should like the ground. Court Dreaming won here just under three weeks ago so fingers crossed he can put in another good performance for his connections in the 3:29 Handicap Hurdle. Back at home we have also been preparing for Perth’s first meeting of year, which begins on Wednesday. We hope to have a good handful of runners both days and entries so far include Uncle Alastair in the 2m4f Handicap Chase, Famous Bridge in the 3m Novice Hurdle and in the Mares’ Handicap Hurdle we have Rubytwo, She’s A Rocca, and Miss Milano.

On the second day Aubis Walk has her first entry for us, after arriving from Ireland on the back of a point to point win for Donnchadh Doyle. There are also options for Big Bad Bear, Universal Folly and Kajaki, who should all love the track and the ground and we’ll find the most suitable race for them. Snowy Clouds and She’s A Rocca are entered in the last race of the day, a 2m Handicap Hurdle. Friday is the final day, and we will have plenty more entries, including Parisencore, Houston Texas and Everyday Champagne, all of whom won on their most recent starts. We look forward to a hopefully successful week to end the official jumps season on and see if we can contribute to getting Brian Hughes over the 200 winners mark. Everyday Champagne, winner at Hexham on his last start

Below is a video from Thursday’s schooling session: 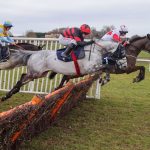 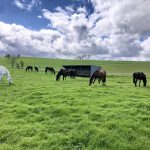 School’s Out For The SummerUncategorized