Changing of the Seasons

Our weekend started off well with Headscarf Lil running a nice race at Doncaster on Saturday. She finished 4th of 15 and faced much better opposition than in in previous races. On Sunday Kajaki won well at Sedgefield under Danny McMenamin; he’s managed quite a few placed efforts in a lot of his races so it was great to finally get that win out of him. Well done to those who had him in their Five to Follow as he will have scored double points!

Many thanks to his owner, Mr Polly, who very kindly sent some sweet treats for all the staff and something special for Georgina who looks after him. Kind gestures go along way and give everyone an extra boost, especially on these dark mornings. In the winners enclosure with Danny & Fran Holme Abbey and Smokey The Bandit were our two runners at Newcastle on Tuesday. Smokey showed improvement in first time blinkers and kept on to finish second by 15lengths – he was giving the winner, who finished eight lengths clear, a stone!

River Meadow and Marown were non-runners due to the ground. River Meadow went to Kelso Thursday and we will wait for a bit more rain for Marown.

Also at Kelso we had Chapel Stile running in the 3m2f Handicap Hurdle, he was blinkered for the first time but is another who prefers the softer ground. Famous Bridge was the last runner of the day in the 4:20 Handicap Hurdle, he was up in class but down in trip from 2m6f to 2m4f and was travelling well when unshipping Brian Hughes at the second last hurdle, but he’s non the worse and he will get his chance again soon.

A quiet weekend before the return of Carlisle on Monday. We have plenty of entries, including Ribble Valley, who will be having his first start since the Fighting Fifth in 2020. He has been schooling over fences nicely and we’re excited to get his chasing career underway. Kian Calling is back from his break having run in a couple of bumpers in the summer. He is in the 2m1f Novices’ Hurdle. Houston Texas is entered in the 3m Handicap Chase, he ran a good race at Newcastle in December so hopefully he can build on that.

In the bumper we currently have four entered. Paddock Cottage for the same owner as Ribble Valley, Coniston Clouds, a beautiful unraced grey horse, Hard Iron and Summergrounds, who have both shown signs of promise on their previous bumper starts. On Tuesday we have Rickety Gate entered at Market Rasen then at Doncaster Thursday Wilhelm Vonvenster, Royal Arcade and Rubytwo are entered.

There is some rain forecast over the next couple of days so fingers crossed it softens the ground up a bit. We had snow again today (Friday) in between some sunny spells! Blue sky and some snow on the hills A sudden snow dump on our way home!

Our last lot of store horses that were purchased in the summer have returned to training after their winter break. They will begin with steady work at the pre-trainers before coming back to us in a few weeks. The Soldier Of Fortune (now named Luckie Seven), has been snapped up already, but we do still have a few looking for new owners or syndicates. We’re always happy to discuss options, so give us a call or send us a message if you’re interested! At the start of this week we said “see you soon” to Brian Donovan, who comes over from Ireland each season. Sadly he had to return home earlier than planned due to unexpected circumstances, but we hope him and his guitar will join us again next season! Brian with some of the staff on his last morning

We’ll leave this here for Brian to sing us out! 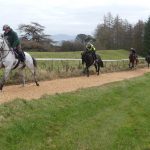 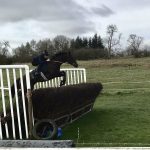