Houston, Winning Is No Problem

We kicked off the week with a winner at our local track, Carlisle. Houston Texas jumped well throughout to win comfortably by three lengths and gave his owner, Mr Crawford, his first winner under rules for almost 4 years!

In the last race of the day, Paddock Cottage stayed on well up the hill to take third place. He will likely have one more run in a bumper before heading over hurdles. Houston Texas with his winning connections

Thursday we were at Doncaster with Wilhelm Vonvenster and Rubytwo. Ruby got herself into the prize money once again when she finished third under Danny McMenamin. A consistent mare; she’s ran in 29 races, won twice and been placed a total of 15 times.

We head to Uttoxeter today (Saturday) with Big Bad Bear and Mayo Star in the same race, the 1:58 Handicap Hurdle over 2m4f. There are plenty of entries next week at Catterick, Ayr, Wetherby and Kelso.

Findthetime is entered for Catterick in the same sort of race he won there last time out. He also holds an entry in a higher class race at Wetherby on Wednesday. Miss Milano is another with options, she has entries at Catterick and Ayr. We have been working to improve her jumping as that seems to be letting her down in races.

Tfou has his first entry over hurdles. He finished second in a bumper in January and has been schooling since.

We have been waiting for softer ground to run Royal Arcade since he finished second at Newcastle in December. We are hoping this comes at Ayr on Tuesday where he is entered in the 2m Handicap Chase.

Court Dreaming and Bullion Boss are also entered for Ayr, with the latter having options of Wetherby on Wednesday and Kelso on Friday. Rose Of Siena has some form to her name, after the winners of her previous races have gone on to win again. She is our sole entry in the bumper at Ayr on Wednesday. Yesterday, we had a stable visit for Highclere Thoroughbred Racing, owners of Snowy Clouds. It’s great to welcome people back to the yard after being restricted on visits over the last couple of seasons.

We also have an upcoming visit for the Greystoke Owners syndicate, who have shares in Serious Ego. It’s not too late to get involved, with share prices now reduced for the remainder of this season. It’s an ideal opportunity if you are looking to be part of a group of like-minded people, enjoy days out at the races an owner and have opportunities to visit the yard. Our aim is to make ownership affordable and encourage more people into the sport from a different perspective. We currently have three shares of 5% available, don’t hesitate to get in touch if you are interested or would like further information. Serious Ego on the gallops Friday

A quick trip up the gallops on Tuesday: 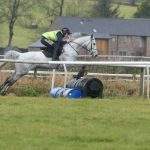 Looking Ahead to SpringGreystoke Galloper 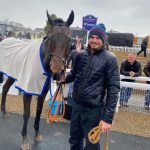