We’re getting back going with our horses again after a brief quiet spell mid January. We’ve had the much needed rain, although it has been questioned why it now doesn’t want to stop!

Last night brought wind and snow to many parts of the country, but so far we’ve got a bit of wind and some rain – usually the gallops are the first place to have snow!

Looking back on the last week, we had a couple of disappointing runs from Big Bad Bear and Marown, the latter having his first start of the season when pulling up at Catterick on Monday; he’d be better suited to a big galloping track so we will find a more suitable race for him next time. Both horses are ok after their races and that’s the main thing.

Royal Arcade was our sole runner at Ayr on Tuesday and confirmed that he’s no longer a two miler and is more effective over two and a half. He’s got the ability and will get his day in the spotlight soon.

Wetherby on Wednesday proved fruitful, with Uncle Alastair running another fantastic race to finish second and then Findthetime stepped up in grade to win the feature race of the day, a Class 2 Handicap Hurdle over 2m3f, by six and a half lengths. He’s an exciting horse to have and we’re looking forward to seeing how far he can progress. Today we are at Kelso (providing it doesn’t succumb to Storm Eunice!) with Bullion Boss in the 1:00 Handicap Hurdle (Hard Iron is now a non-runner).

Quickly onto Saturday and we are sending Crystal Glory to Haydock for the Grade 2 Prestige Novice Hurdle over 3miles. The only blemish on his form so far is his second place last time out, which did cause some controversy after the eventual winner went clear by 19lengths and failed to be caught. Like Findthetime, he is exciting and progressive and we’ll see just how good he is on Saturday. Monday is Carlisle where we have Famous Bridge, who was travelling well when unseating last time out. He’s in the 2m3f Novice Hurdle, he was second in a similar race on his first start over hurdles here in October. Holme Abbey is back over fences after a confidence building run over hurdles last time out and Glittering Love who won here in December. Snowy Clouds is due to be back out again soon with the option of Carlisle on 21st or 28th.

Serious Ego has an entry for Market Rasen on Tuesday and also has options of Huntingdon and Sedgefield on Thursday. The ground will be on his side at long last and we hope he can run a nice race for his owners. Court Dreaming and Chidswell are entered at Doncaster on Thursday. 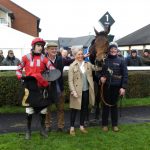 Houston, Winning Is No ProblemGreystoke Galloper

Sunshine After The RainGreystoke Galloper