We’ve had a busy week with 17 runners across 6 meetings. Marown being the standout performer with a win at Wetherby when he stepped up to 3miles for the first time. My Old Gold also put in another great performance when second at Carlisle on Sunday. She has been a great mare for her owners, Tor Side Racing, and this week we welcomed their new arrival from Ireland, 5yr old Findthetime. Guitar Pete ran another below par race at Kelso on Monday and the decision has been made to retire him. After coming to us in 2017 he won 3 races as well as placing 8 times. His biggest success coming in the Grade 3 Caspian Caviar Gold Cup at Cheltenham under Ryan Day, who partnered him in the majority of his races.

He’s a horse that has given me lots of wonderful memories to cherish, we’ve all enjoyed some great days with him. It’s sad that he’s come to the end of his racing days but I’m delighted he’s out in one piece and can have a happy retirement. Ryan Day and “The Gold Cup”

In his career he won over £300,000 for his owners Mr & Mrs Sloan, he also got himself lots of fans a long the way, who I’m sure will all be happy to hear he’s retiring sound and  happy (well as happy as he ever is!) We don’t know what his future holds yet, but we’re sure he’ll get all the love and attention he deserves. He’s a right character and will be missed at Greystoke. He’ll join our unofficial list of “Famous Greystoke Greys” alongside the likes of One Man, Monets Garden and Noble Alan. Looking to the week ahead we have 2 runners declared at our local track on Sunday. In the 2.20 Novices’ Hurdle Headscarf Lil will have her first run since getting off the mark over hurdles at Musselburgh in November. She’s a lovely mare and hopefully she can enjoy a nice spring/summer campaign. Sean Quinlan rides. Also in the race we have Royal Arcade who won in great style here last time out. He jumped beautifully throughout the race last time and looks to have great potential for future chasing. We are hopeful of another big run on Sunday and Ryan Day partners him once again. At Newcastle on Tuesday the unraced Desert Sapphire is entered in the 1:00 Novices’ Hurdle. She is a sweet mare at home, she does her work nicely and has jumped well in her schooling sessions.

2.35 Bon Retour has been a bit disappointing on her first couple of runs since joining us. Hopefully she will start to show a bit more as the ground improves for her further into the spring/summer.

She has ran well the last twice finishing second on both occasions. She is still relatively lightly raced and should be able to improve as she gets more experienced. Hopefully it won’t be too long before she can go one place better. We have a few entries at Hexham on Wednesday. Glittering Love is in the 3:10 Novice’s Hurdle, he is probably better known as a chaser, however he did finish second at Carlisle over hurdles last season and he should be able to win over hurdles if the race is run to suit his stamina. Murvagh Beach holds an entry in the handicap hurdle. He’s learning all the time and benefitting from every run and there should be even more improvement in him as he gains more experience. He ran a solid race last time out to finish second and hopefully he should continue to progress. He also holds an entry for Wetherby on Thursday.
In the bumper we have Release The Kraken who showed promise on his first run when staying on strongly in the latter stages of the race, the experience will have done him the world of good and hopefully he can progress forward. 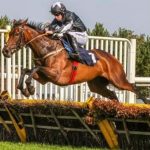 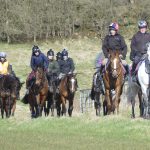