The sun has been shining in Greystoke this week and although we’ve had a quiet week on the winners front, everyone is in good spirits and enjoying the better weather (although there is snow forecast for the end of the weekend!). The horses have been enjoying a pick of grass after their exercise. Hopefully we’ll be able to resume their daily turnout again soon.

Today we head to Carlisle with 3 runners. This would usually be such a busy day for them as they hold their “Easter Funday Raceday” and it’ll be sad to see the course so quiet.

Holme Abbey runs in the 2:13, making his debut over fences. He hadn’t run for a while when putting in  a pleasing performance 3 weeks ago at Newcastle. Danny McMenamin takes the ride in place of Ryan Day who unfortunately  has been sidelined since taking a fall at Wetherby on Thursday and is feeling pretty sore. We wish him all the best and hope he’s back in the saddle again soon.

At 2:48 we have Wetlands who has won his last 2 races in fine style. If he finds the drying ground ok then hopefully he can continue to progress under his regular jockey Brian Hughes.

Better Getalong made a belated chase debut at Carlisle last time out. He jumped nicely and ran a respectable race considering he had something to find in the weights. If he can continue to enjoy jumping fences, he can continue to grow in confidence and return to some more positive races. Danny McMenamin picks up the ride in place of Ryan Day. Tomorrow we head to Market Rasen with Universal Folly and Sauce Of Life. Folly has had a little break since his last run in November, he has been very consistent in all of his races and he should approve of the good spring ground. Sauce Of Life won really nicely on his debut at Musselburgh in December. We have taken our time with him since and waited on some nice ground. Brian Hughes will ride both. Wednesday we are back at Newcastle, only this time we have a runner on the flat. Wilhelm Vonvenster has been rather disappointing so far. He will be ridden by our lady amateur Josie Elliot, with the ban of amateurs in sport now lifted, it will be nice for her to be able to get out on the track again.

The end of the week sees the build up to The Grand National Festival at Aintree. On Thursday Looking Well will run in the Foxhunters. It will be a first run over the national fences for him and so as always we hope that he takes to them well. Both him and Takingrisks schooled over our national style fences this morning and both jumped really nicely. You can watch this mornings video from the gallops here:

This week the popular Caius Marcius returned to the gallops in preparation for his spring/summer campaign. He’s been a great “summer jumper’ for us and we hope he can have another successful season. We would like to wish everyone a Happy Easter Weekend and hope you have been able to spend time with your loved ones again now that restrictions have eased slightly. 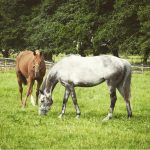 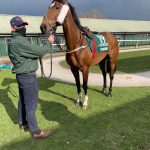