It’s been a busy day at Musselburgh today with 4 runners. Kitty Hall and Bullion Boss ran good seconds, but the star of the day was Petite Ganache who got off the mark over fences under top weight. Tomorrow we hope to be heading down the M6 to Haydock Park, providing the track passes an 8am inspection.

Our day will kick off with Marown stepping up to graded level for the first time in the Grade 2 Novices’ Chase, partnered by Sean Quinlan.

Reivers Lad makes his return from over 2 years off the track. He runs in the 3:50 Handicap Chase. He is no stranger to running from a long layoff as his last run came at Newcastle, when he made a winning return after 18months off the track. Ryan Day takes the ride. The last race on the card will be a second run of the season for Serious Ego, following his pleasing comeback at Ayr in November. He is also the mount of Sean Quinlan.

It will be testing conditions for all runners tomorrow, but we look forward to seeing them showcase their efforts and wish them and their jockeys a safe round.

After a couple of days to catch our breath, we will most likely be heading to Kelso on Tuesday where we currently have several entries.

Wednesday at Catterick has Glenduff and Marown entered in the 2m5f Novices’ Chase.

This week has been better for us weather wise, with the snow and ice finally melting we’ve been able to get back into a routine with working the horse (although not without the odd snow flurry threatening us!) As always, we hope you are continuing to be safe and healthy… here’s a short video to keep you going until we can allow visitors once more.

From All at Greystoke 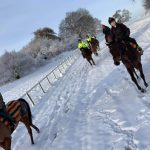 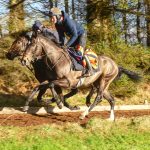