Age Is Just A Number

Taking our thoughts back to last Saturday… What a day! Our ‘Mr Tough’ once again toughed it out and did us proud when winning the Sky Bet Chase at Doncaster. https://www.racingpost.com/news/12-year-old-takingrisks-rolls-back-the-years-to-hold-aye-right-in-sky-bet-chase/470781 He’s come out of the race in great form with himself. He holds an entry in the Grand National and will also be entered for the Scottish equivalent, a decision will be made closer to the time as to which option he will take. As Nicky said in his interview, he doesn’t know how old he is! He’s a horse full of character and energy. Fun fact – he doesn’t like carrots or mints! Tomorrow we have 2 meetings; at Musselburgh we hope that Glenduff can finally make his start to chasing following his unlucky run of abandoned meetings. He has a little bit to find with one or two of his rivals at the weights but hopefully he can make a nice start. Callum Bewley takes the ride.

We also head to Wetherby with 3 runners,
Mayo Star and Better Getalong both run in the 3.00.
Mayo Star reverts back to hurdles following a respectable chase debut. He won 2 hurdles very nicely last season, the trip and ground should suit him well. He will be ridden by Danny Mcmenamin.

Better Getalong has struggled to find his form in recent runs, but he seems in good form at home and hopefully he can run a more promising race. He will be ridden by Ryan Day.

Wetlands runs in the 3.38. He won impressively at Ayr last time. The ground conditions once again shouldn’t be a problem to him and hopefully he can run another nice race. He will be ridden by Ryan Day.

On Sunday we have 3 runners declared for Musselburgh.
Tidal Point will be our first runner of the day at 2.25. Formerly he was trained on the flat for Steph Hollinshead where he had some nice placed form over staying trips. We hope he can take to hurdles nicely on his jumps debut. Ryan Day rides.

At 2.55 Chapel Stile runs in the 3m2f handicap hurdle. He ran a much more pleasing race last time when finishing a close 3rd at Carlisle in first time cheek pieces. Hopefully he can run another solid race under Ryan Day.

At 4.25 Bullion Boss will run in the 2m6f handicap hurdle. He has been in great form recently with a win in between two seconds and hopefully he can continue his good run of form. He will be partnered by Ryan Day.

The forecast doesn’t look too promising for the week ahead as the frost looks set to return and next week’s meetings will rely on the weather being kind to us and temperatures staying above expected.

We hold entries for Carlisle on Monday however the course holds an inspection at 8AM on Saturday. The course is waterlogged in places and temperatures are due to dip to -3 from Saturday.

Towards the end of the week Doncaster on Thursday we have entries for Tidal Point, Wetlands, Amberose and Rubytwo.

We would like to take this opportunity to thank Nigel Kirby for his beautiful photos taken on Saturday at Doncaster. They are available to view here: https://www.nigelkirbyphotography.com/Horse-Racing/Doncaster-Racecourse/Meetings-2021/Doncaster-Races-Sat-30-Jan-2021/Race-5/

Not sure where the future winners photos will go once the kitchen is full!

Have a good weekend, from all at Greystoke 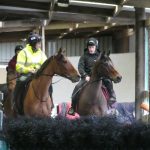 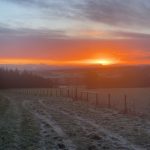