It was great to be back at Carlisle Racecourse again on Thursday with 4 runners.

Despite a bit of trouble in the preliminaries, Danny McMenamin did a sterling job getting both him and Findthetime to the start safely and he ran a nice race, staying on well to take second place. On ratings, there wasn’t much separating the trio in Court Dreaming’s race, and that showed with less than 2 lengths between them at the finish. He jumped nicely all the way around and showed he still retains the ability we saw when he won this race 12 months ago. A change of tactics worked well for She’s A Rocca who just ran out of steam coming up the hill after keeping up with the pace most of the way. It was lovely to see her showing some of her early promise again and hopefully she’ll come on from that run and progress throughout the season. We have eight entries for Carlisle again next Thursday, including the very promising Nells Son who won two out of his three starts in bumpers last season. He is entered in the Novices’ Hurdle over 2m4f alongside Everyday Champagne who showed some promise last year and has matured nicely over the summer. Serious Ego also holds his first entry of the season for his new syndicate, ‘Greystoke Owners’. The shares in him have been selling fast, but it’s not too late if you still want to be a racehorse owner and experience the buzz and excitement without the financial risk. Contact Tom Hurst (syndicate manager – tom.hurst1@live.co.uk) or our office for further details.

Caius Marcius heads to Market Rasen today (Saturday 16th) where he runs over the same course and distance of his last win back in July. The ground is still on his side which is unusual for this time of year, so hopefully we can get a good run out of him. On Tuesday we took Glorious Spirit, Soft Risk & Houston Texas on another away day for some schooling. As well as this, we have been getting plenty of schooling done at home, some of which features in our latest video:

Our 5 to follow is now underway and there are already some points up on the board! If you have returned to a racecourse recently, we hope you’ve enjoyed being back as much as we have! 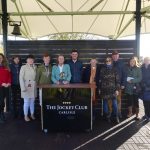