This week has been Racing Welfare’s “Racing Staff Week” which is all about celebrating the hard work of those who work in racing. It has been lovely to see so many wonderful posts from various yards, showing the appreciation for their staff. This includes ourselves, who are very proud of our secretary, Antonia Reid, who won the “Lifetime In Racing” award for the North Region.

No one is more deserving of this award than Antonia, who has been dedicated to the racing industry from the age of 13 when she started riding out for Gordon Richards. Antonia took on her first racing secretary role in 1981 and has never looked back. She returned to Gordon Richard’s Greystoke yard in 1996 and has been there ever since. Antonia’s passion and dedication for her job are unparalleled and she is an essential cog in the Nicky Richard’s team. Antonia surrounded by friends and family

Being a racing secretary is far from easy, Antonia deals with the staff, the owners and has a “half-mad” trainer to handle – she has a lot to deal with! She has been brilliant over the years and still continues to be. She is like family here at Greystoke and the whole yard is thrilled she has won this award. – Nicky Richards Shortly after this presentation, we had even more to celebrate when Rickety Gate and Sean Quinlan won the first of a quick fire double in the 2m4f handicap hurdle. ‘Rocky’, as he’s known at home, is looked after by Amy Corrado, this was her first time racing for us and she lead up a winner! Well done Amy! Rickety Gate in the winners enclosure

This was quickly followed up with Headscarf Lil winning the second division of the same race, the first time out for this particular set of colours of Accurite Racing. Congratulations to all connections, it was a fantastic end to the day, especially for Amy Crowe, who gave up her afternoon off to go racing with Lil. Delivering her challenge under Sean Quinlan Lilly with her winning connections Many thanks to all at Carlisle racecourse for everything they do, as well as their amazing hospitality for Antonia and her entourage. It was a wonderful day. Tomorrow (Saturday) we are heading to Kelso with 4 runners.

Parisencore and Nells Son are in different divisions of the Maiden Hurdle over 2m and will both be ridden by Danny McMenamin. Nells Son is a very exciting horse, having only been beaten by a nose on his debut and then going on to win two bumpers last season. Of the two, Parisencore is the only one who has form on good ground so it will be interesting to see how Nells Son handles the quicker going, having previously won on heavy. Later in the day Chapel Stile makes his seasonal reappearance in the 3m handicap chase, again another horse who would probably prefer softer ground. Duke Of Navan – well, what can we say! Another ever popular legend of Greystoke. His first run was back in 2012 and he’s had many jockeys during his amazing career, whilst many have since retired, The Duke is still going strong at the incredible age of 13. His current jockey, Danny McMenamin, was just 12 when Duke made his racecourse debut! He’s a horse who loves his job and is still as keen as ever to get on with things. He runs in the 2m handicap chase at 4:29. All smiles from Duke

Monday sees the return of Ayr’s jump meetings, one of our favourite tracks where we hope to have a few more runners. Sauce Of Life is another promising horse in the 2m division and Rose Of Siena hold her first entry for us in the bumper. It has been a very dry autumn so far up north, not something we’re used to at all! We have a lot of horses “waiting in the wings” and as soon as we get the soft ground it’ll be all systems go. 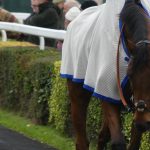 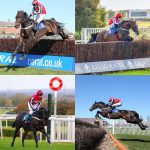 From The End Of An Era To New BeginningsGreystoke Galloper