It’s the run up to Christmas, and although we’ve had a quiet week on the racing front, there’s been plenty of preparation going on. The busiest day of the racing calendar is just over a week away and we should have plenty of runners across the festive period.

Our only meeting this week was on Sunday, where we had two runners at Carlisle. Uncle Alastair ran a smashing race, finishing a close second to smart horse Papa Tango Charly. It was fantastic to get him back on a racecourse and even better to see he’s retained his ability. He’s come out of the race well and hopefully we can get a good season out of him. Glittering Love had been without a win since he won four in a row in 2018/19 but the first time blinkers helped him regain that sparkle and he scored in the 3m2f handicap chase under Brian Hughes. A great day for Eddie Melville with both his runners

Today we have runners at two meetings. Starting the day off at Newcastle is Soft Risk. He won well on his hurdles debut last month and will be partnered for the first time by Sean Quinlan.

We then go to Haydock for the 12:55, a listed Mare’s Novice Hurdle in which Miss Milano lines up. She finished third at Ayr on her debut and will have learned a lot from that run. She faces tougher company this time round but she should still run a nice race. Miss Milano after her third first time out

Houston Texas is one of four runners in the 1:05 at Newcastle. A big horse who is heading back over fences again after so far being disappointing under rules. The final runners of the day are Headscarf Lil and Rubytwo in the 2:15 at Newcastle. Ruby is another who took well to first time blinkers last time out. With her usual jockey Danny McMenamin sidelined, Mark Galligan has got the ride and will be hoping she can go one better than last time. Sean Quinlan will be giving him a run for his money aboard Lil as she steps back down to the distance she won over at Carlisle in October.

Musselburgh on Monday we have four entered. Desert Sapphire is in the 2m4f Maiden Hurdle but also has the option of Ayr on Tuesday in a 2m Maiden Hurdle. Her sole start was back in March and it’ll be nice to get her on a racecourse again.

Musselburgh runners are Oscar Clouds and Rose Of Siena. Rose ran a nice debut at Kelso and bumped into what looks a smart horse who has since gone on to win easily over hurdles.

At Ayr we also have Parisencore entered alongside Desert Sapphire in the Maiden Hurdle. Paris is looking to break his duck after finishing second on his last three starts. One thing is for sure though, the weather conditions can’t be any worse than he last raced in!

Trying to find the right race on the right ground for Serious Ego hasn’t been an easy task. He’s entered over 2m4f, a trip he finished third over at Ayr in November last year. He’s looking really well in himself and we hope he can give his owners another good day out! Nells Son steps up in trip to 2m5f for the first time. His half sisters Amberose and Rubytwo have both won over 2m4f so his breeding would suggest he should see out the trip no problem. Royal Arcade has also been stepped up in trip from 2miles to 2m4f after being outpaced last time out. He’s been schooling well at home and is another who’s looking well in himself.

We will have plenty more runners over the festive period, keep an eye on our social media pages for updates.

We’d like to wish everyone a very Merry Christmas and a happy and healthy New Year. Thank you to all our owners for their continued support and patience through testing times these last couple of years. Also a big thank you to our sponsors Equine Products who provide us with supplements that keep our horses healthy and for providing our race day paddock equipment. And not forgetting all of our dedicated, hard working staff, who we wouldn’t be able to run a yard without, thank you for all you do for the horses 365 days of the year. 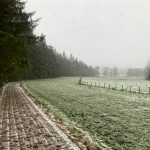 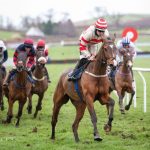 An Update From The Festive SeasonGreystoke Galloper