I apologise for how long it’s taken me to get the Greystoke Galloper up and running again but we’re finally here! There’s a lot to catch up on so I’ll jump straight in. Since the last blog update we have increased our tally of winners by 6, bringing us to 21 winners so far this season.

Our first of these wins came at Musselburgh on the 2nd of November with Rickety Gate and Conor Rabbitt.  This was the pairs’ second consecutive win this season, hopefully their streak continues. Hard Iron and Callum Bewely had another successful race at Ayr on the 9th of November, we’ll be looking forward to seeing what more these two can do together. On the 16th, Crystal Glory made his debut over fences at Hexham and won very impressively, with a confident ride from Sean Quinlan they left the rest of the field 20 lengths behind!

Our next winner came on the 24th at Kelso, with Miss Milano and Conor Rabbitt, who rode his first double on the day. To conclude our roundup of winners, we had a double at Doncaster on the 25th of November with Caius Marcius and Everyday Champagne. Caius was ridden by Jack Power, who was having his first ride for the boss since joining the team at the beginning of November. Originally from Waterford in the south of Ireland, Jack has made quite a name for himself on the point to point scene. Here’s to hoping he can do the same under rules. Everyday Champagne was our second novice chaser to win on debut this season and he took it all in his stride.

Over the last week or so there’s been snow on the fells again and the temperature has dropped well below zero.  Thankfully we’re still managing to use the gallop, or half of it at least, despite the freezing conditions.  I’m sure the yards good form will continue through the harsh frost.

We have a few entries coming up for next week but we’re unsure if we’ll get the chance to run. Despite their best efforts to keep the tracks safe for racing, some racecourses are having to abandon meetings due to the weather.  Hopefully I’ll be back next week sharing the news of more winners!

*personal note*
I’d like to thank you all for your patience as it’s taken a while for me to update the blog. It’s difficult enough trying to follow in Isla’s footsteps, let alone attempting to write a blog having no previous experience! I’d really appreciate any feedback or constructive criticism you might have. I’ll leave my email below.
Thanks for reading,
Amy 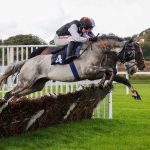 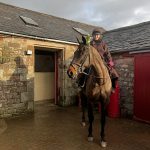