We are excited to share with you our TWO new syndicate horses: Both horses are part of one syndicate that will be limited to 15 shares (6.66%), with the cost including the purchase price of the horse and all their training fees*.

Nicky sources good value horses by looking for lesser known, up and coming sires, like Lucky Speed. He won the Group 1 German Derby in the fastest time this century, as well as breaking the course record when winning the American St. Leger on turf in 2015.

Sprightly Gal is the dam of two winners from five runners, and the family have bred plenty of other winners over the years; her Grandam foaled the third dam of multiple Grade 1 winner, Chantry House.

Tell The Tale is a winner of two races and also placed twice. She is the dam of five foals, this one being her fourth, and has already had great success a broodmare. Her first foal was the winner of five races and placed eleven times and her second foal won on her debut in a 5yo+ Mares’ Maiden Point to Point in March 2022.

Full pedigrees can be found on our Horses For Sale page.

This is a fantastic opportunity to become an owner of two National Hunt horses and embark on their journey as they progress their careers. Both horses will be aimed at bumpers in the coming Autumn/Winter, whilst being educated throughout to become future hurdlers/chasers.

If you have any questions, or would like to be part of this syndicate, please get in touch.

*training fees due annually and subject to increase in line with inflation.

From being broken in to accepting a rider

Having an introduction to schooling 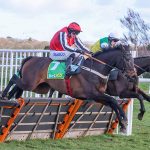 Stars Of The SeasonGreystoke Galloper 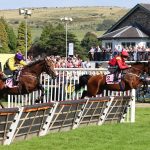